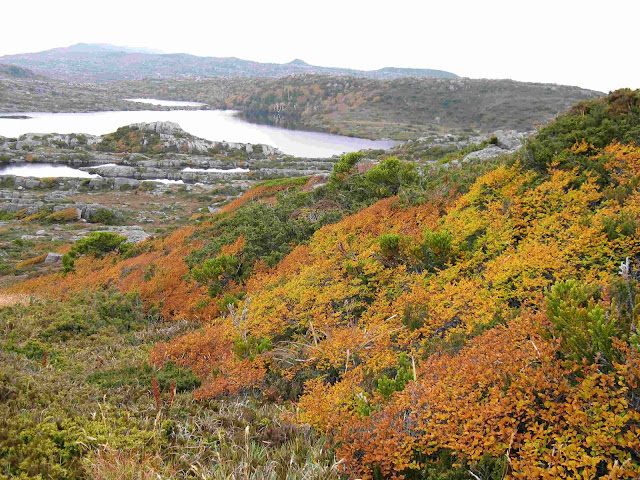 The range is of conglomerate and is around 1000m. It is steeply sloped on the west and large cliffs on the east. Along the southern portion are many lakes and tarns and low alpine meadows. At the northern end is Mt Tyndall at 1179 metres and on the southern end Mt Geike at 1193 metres

A vehicle track leaves the Anthony Road to a suitable car park near a locked barrier. The walk follows the power line access vehicle track beyond the barrier over a bridge then north to walk parallel to the Tyndall Range. The start of the walking track is marked with a walker registration box.

Initially the track crosses a level bit of button grass to the and north of a waterfall gully but soon begins to ascend through scrub before emerging on to a distinct ridge. From here the clearly visible pad turns somewhat north easterly and climb steadily up the side of Tyndall eventually veering easterly and levelling before turning well up on the range in a south easterly direction where there is sheltered camping in a picturesque valley with a small lake and not a great distance from Lake Tyndall.

The whole of the pad from the start at the access road is marked mostly with rock cairns. On the upper section if the pad is lost there is no harm in heading high to ensure that the plateau is reached above the level of Lake Tyndall. If the return descent is in mist would need to get to 829561 which is usually marked with a larger rock cairn. From here the pad down is clear all the way.