This bushwalk is mostly in the Woodvine Nature Reserve.   This area was bequeathed in July 2001 to Parks and Wildlife by the former owner to ensure that the part that is bush remains that way.  It is 377 hectares and probably some 70-80% of this is relatively untouched bushland which at times has a multitude of birds, adding to the attraction.  The former cleared land is revegetating, but unfortunately much of this is by invading Spanish Heath.
This walk leaves from the old homestead on the Woodvine property that was  to PWS as a nature reserve. The walk follows along a sandy vehicle track on the southern boundary for some 2.5 k before ascending gently for 850 metres to the top of Mother Browns Bonnet; for a height gain of 150 metres, so is not an arduous climb.
The old vehicle track passes through heathy shrubland, including  small button grass plains and is revegetating in places.  However at the moment the route to walk is very clear.  Glimpses of Mother Browns Bonnet can be noticed from about half way along the track and on arrival at  a higher point on a wooded ridge a turn is taken to begin the ascent to the summit plateau. A fence line is reached and immediately beyond this there are signs of an but faint vehicle track.  Also some plastic markers have been put there to indicate a route up.  However the better way is to ignore theses and follow the old track in a south westerly direction for a short while then head up the mostly open going slope.   The route marked by tape is rockier, has more scrubby bits and is steeper.
The plateau on top is quite open and grassy but surrounded by trees and shrubs.  There are two summit plateaus; the first is smaller and slightly lower (405 metres as against 411 for the second and wider one).   Return by the same route; although on the map the optional marked route was partly followed down to see what it was like. 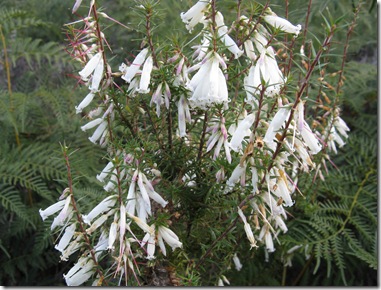