Initially the track follows the river and passes an old washed out bridge still with a sign.   This was the original way in before it was destroyed by floods.
Soon after a turn is reached and the track crosses an open area of former farmland, then goes through groves of tree ferns and past  immense swamp gums.
The falls are within an area of old forest with moss-covered fallen logs, ferns and rainforest plants. The total return distance to Marriotts Falls is around five kilometres.
The second falls is a different style of walk as it follows and now little used pad, which although it has some markers there are fallen logs to climb or duck under and at times the route becomes somewhat obscure.  Initially the pad climbs to reach the top of the first falls then continues climbing and then sidles well above the creek.  However the last part drops down to the creek floor and follows it up to the base of the second falls.   A third, smaller waterfall is a bit further up and is reached by just following close to the creek once having got above the second falls.

Click here to view the route.  It does not include the third falls. 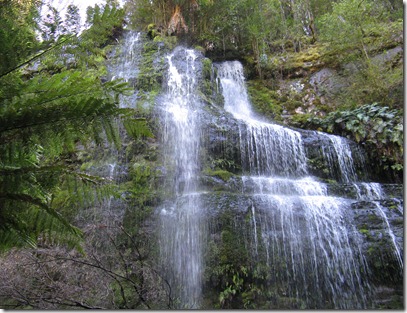 A photo album is also on the web