Between Junction Creek and the old shelter site the track is very muddy then drops to sizable creek and eventually to a boardwalk (replaced 2008) followed by a small section of drained track then back to a muddy track, although some parts are on harder quartz and not so bad. Majority of track is badly braided. It was once an easy track to base of Moraine A. Dry campsites at old shelter site about 20 minutes from Junction Creek, but now somewhat overgrown with seedlings from 2007 fire, and sometimes a poor open site, depending on recent weather, for 2 tents plus another nearby again for 2 tents and both on bare ground at foot of moraine.

It is a stiff climb up the moraine especially at the start and near the top. The track is in very poor shape with much braiding and eroded steps. There is a small campsite at the top of the moraine behind some rocks and bushes. On the top rock work has replaced the previously braided and muddy track (since March 2002) leads high to Mt Hesperus where it meets the older rock work that provides a good track with another now rock hardened section (again since 2002) in saddle on ridge to Lake Cygnus and continues all the way to Cygnus and also when leaving. The old track existing is still very noticeable (it was deteriorating in 1983 but still OK then). Room for several tents (aprox 10) at Cygnus on 2 platforms and a rubber area and one gravel site. Fly in toilet. 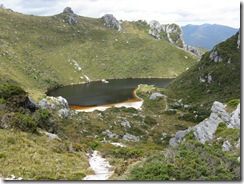 Track leaves Cygnus and retraces steps to a junction before climbs to Mt Hayes then down to a ridge below Procyon Peak. Follow round to and down to Square Lake and climb to Orion saddle then down scree to beautiful Lake Oberon where there a plenty of tent sites (4 platforms taking 2 tents each plus a hardened area for 3-4 near shore). Fly in toilet. 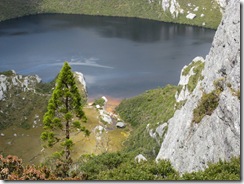 It is steep climb to Pegasus, including a difficult little rock cliff early on plus a hole to negotiate through near the top. A ridge from where a ridge is followed to Mt Capricorn. This ridge does descend an eroding slope towards lake Uranus before climbing back up to Capricorn. It is a very steep descent off Capricorn via earth steps to the saddle below from where the ridge is followed to near Dorado Peak and then up to High Moor.

A quite tortuous section follows over and around Beggary Bumps and The dragon and onto a ridge across to the slopes of Mt Taurus and down to Haven Lake. Four platforms and a toilet are located at the lake. 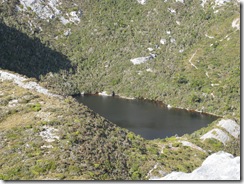 Climb to ridge above Haven then a short descent follows and a contour below a peak onto a more open and wider ridge before a sharp and eroding descent down a steep slope to Lake Sirona, including a short scramble over a rock face and on to Mt Scorpio. From Sirona to the peak before Scorpio has now been rocked, then there is quite a steep descent to Lake Vesta, firstly N then turn S into narrow gully. Lake Juno is close by and a climb back up brings you to promontory Lake where camp sites exist at south end. The Vesta turnoff is on Moraine E and from the Vesta junction there is a track down to the plains.

Climb to top of The Phoenix turn SE and follow along Centaurus Ridge and climb to crest of the Crags Of Andromeda. Follow along Crags N until high continuous cliffs to E can be seen from the plateau. The track follows down under these to Lake Rosanne.

Quickest route is out on plains NW of Lake Rosanne, but scrub on two creeks has to be negotiated, the second being Strike Creek (1:30). Keep to centre of plains for the most open going and pick up track near Nine Mile Creek and onto Seven Mile Creek (2:30) Room for 4-5 sites. Then follows Wullyawa Creek (2:00) & 2-3 sites, Two Mile Creek with plenty of camping (0:45) and Junction Creek (0:45)

Click here to view the route on a map