Generally a fairly easy and short walk but the longer version is a bit rougher and adds an extra hour to the normal route to the summit.   This extra section is untracked and involves a descent and an ascent back to the high point.
Starts from a forestry road off Wielangta Rd south of Orford and climbs gently to the ridge line of the Three Thumbs, then follows this along over a few small bumps to the highest point at 549 metres. The walk can be extended to the western most hill of the Thumbs. It is only about 1 hour to the actual main summit and the extension makes the walk more worthwhile. The descent off the summit is on a rock scree but is not difficult. An optional return along the south flank to avoid climbing back to the summit is a little scrubby in parts but mostly reasonable and a contour with the west saddle needs to be maintained. However the better return to make a variation is via the marked forest loop track which

Start Point -  Off Wielangta Road near Orford
Hazards Loose scree and boulders
Route Conditions Main track is undulating and climbs several peaks on way to summit. Remainder is rough
Facilities None on walk, but a picnic site near start and cafes at Orford
Distance Klms 5   Time Hours 4
View of the main Three thumbs summit from the western peak 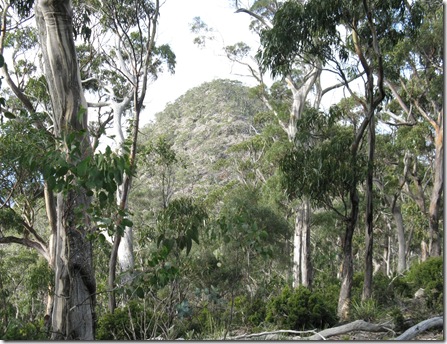