Initially the track remains close to the North West Bay River, including a very short section using the rocks of the river.  It eventually climbs  in zig zag fashion up an old fire trail  to reach the junction with the track to Cathedral Rock. Part of the climb to the summit is steepish with a few step ups over rocks.   Aprox 2 hours to summit

From near the summit of Cathedral Rock a cleared route follows ridge top through top the junction with the old Montagu fire trail.  It follows on a ledge on the south side, drops into a small gully then ascends  (through an section of minor erosion which would be best rerouted) to join the high part of the narrow ridgeline for relatively easy walking before reaching a small decent and then several short ups and downs over rocky tors  before crossing a lower saddle and a final but short ascent to the relatively flat top of Montagu Thumbs.   There is short descent (again with a short section of loose and eroding soil that may well be best rerouted) before following the cleared and marked track through a flat and thickly vegetated section to meet the old Montagu track. (About 1 hour from Cathedral)

At the junction the north east heading track passes a track that leads up Mt Montagu  and continuing aprox 20 minutes along the track trail there is a turnoff to Wellington Falls  and then further along soon thereafter the track heads off the Thark Ridge. From the Thumbs junction the south west part takes you down the old Montagu fire trail for about 5 or so minutes to the Norris hut and continues down to Mountain River. 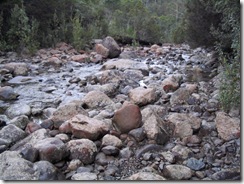 North West Bay River is used for a short section 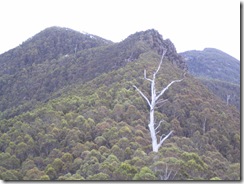 Montagu Thumbs from the ridge top