Beyond the Collins Cap track an old regenerating fire trail is used before picking up a marked route down to Glen Dhu Rivulet.   Large cliffs known as Yellow Cliffs are beyond the rivulet. 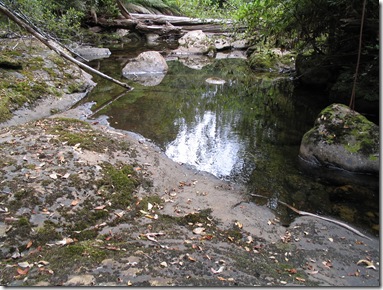 The steady and at times steepish track from Myrtle Forest is taken to the junction with the Collins cap Fire Trail. A short section of the bush track to Collins Cap is then taken until reaching the old Glen Dhu fire trail.  The old fire trail is steadily getting more plants established on it and parts are now reasonably covered to the extent that you have to weave about between the bushes to walk along it.  Some trees also down and now would make bike access difficult.

The turn off to Glen Dhu is becoming less clear and after a 200 metres the narrow pad is at time indistinct.   In the lower section some yellow tapes indicate the way. As well as some indistinct parts the pad is also steepish in the section just before reaching the rivulet. 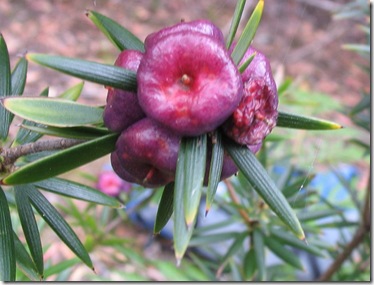 The initial part of the walk follows the creek up and it is now quite evident, after the 1967 fires, that Myrtles are beginning to be quite prolific.  The bushland along the old Glen Dhu fire trail is quite delightful, initially with Myrtles, correas and numerous waratah bushes, then on the somewhat drier slope the cheeseberries  and as you get lower the Ozathamnus (daisy bush) is striking in summer.  However the delightful masses of  trigger plants are the highlight; particularly in January.

It takes about 2:45 each way to Glen Dhu Rivulet