Various routes can be taken to Davis Lookout.

The most direct crosses in a rough line from windy Moor to Davis.

The route to Field East is simply along the formed track. The descent off Field East has to negotiate some rocky screes parts oh which have tree and scrub cover.  At the bottom a plain is reached with an array of low bushes and herb.  It is a fairly easy crossing of some 700 metres to an attractive woodland which has some pools  before reaching another plain followed by another woodland.  The highest part of this final snowgum woodland is traversed  towards Davis Lookout.  However from this direction the actual summit can not be seen and several rises are encountered which may seem like the top.  The third one along is the actual top.

The return can by the more direct route over the lower sections of Windy Moor.

The overall distance about 11km with 6 of that being off track. Some uneven terrain and there are rocky sections to negotiate, but not difficult. 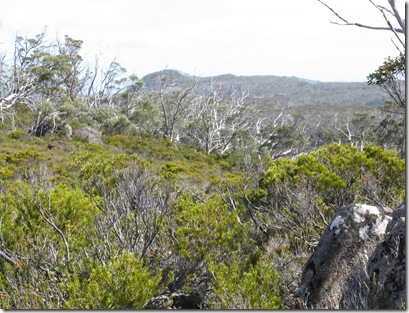