A rough route from the Organ Pipes Track to the Pinnacle.

This rough route is rumoured to follow the location of the New Town Red paint Track that was in existence in the early 1900's. There were two tracks coming close together near the Organ Pipes, one from Junction Cabin to the Pinnacle and the other running more to the north.  The latter one was known as New Town Red Paint and the other just as Red Paint.  From the join the section to the pinnacle was known as Haywoods Track Records show this to be in existence by 1931 and in 1942 with a 1957 report describing it as a blazed and cairned route over large tumbled boulders – 'recommended only for walkers wearing nailed boots' (Aves).  However the route now marked with red paint on the rocks are of more recent vintage so it can't be certain that it is in fact on the original route.

There are several option for getting to the start, with the quickest being from the Chalet.  The good standard Organ Pipes track is followed to a point just a little before the start of the Organ Pipes cliffs and a rough route is used over a rock scree.  This continues up to a junction then climbs around some largish rock areas, through two nice wooded section then out into the open mountain summit area and the option then is to descend  via the Zig Zag track and back along the Organ Pipes track to the Chalet.  A longer walk would be via the Ice House track.

Apart from red paint, some of which seems newer than others,  there are a few plastic markers nailed to trees.  Nearly all these markers are nailed fully into the trees and many are now either being popped off  or swallowed by the trunk growth. 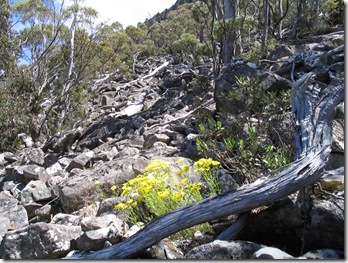 For GPS data for this route