Initially the route follows beside the Prosser River along a distinct wide track but shortly after it rises up a small hill a right hand turn is taken on a rougher, but still wide track is taken which eventually ends when a power line and tower is reached.  From here a light pad is followed up hill for about 30 minutes.  This goes close to the cliffs overlooking the Paradise Gorge part of the Prosser River  then reaches more open forest especially close to the top of the hill.  From the hill a fairly direct line can be taken to drop down to the Old Coach Road, which at this point is on the dry northern slope.  On reaching it the track descends to Bridge Gully and the creek crossed, although on either bank the old road can not be seen on the opposite side.  It then goes along the shady south flank just above the river before descending to river level where it becomes quite indistinct amongst the vegetation at the next creek crossing.  It is best to move to slightly more higher ground to get round this section before picking up the old road which becomes quite distinct and obvious once past this short section (updated information July 2011).     The track then follows on towards the Brockley property, but what may be encountered is not known.

A option for the return is to continue north past the point where the inward journey met the old coach road until the top of the hill then veer  back south east to cross over the hill tops to meet the inward path.   The old coach road can be followed further down to the Station Creek and on up the next hill where a formed road is met. 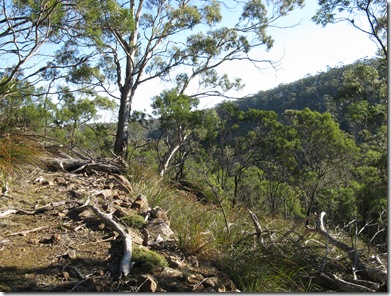