The most direct route is Honeysuckle Road from Ross, a distance of about 44k.  The road leaves the Tooms Lake Road about 18k from Ross and is initially a low standard but not overly rough gravel road for a large part of the distance, but does become rougher over the last third of the way. The former bridge over the Macquarie River no longer exists and ends at a rock barrier just prior to the river. A track leaves the road at the bottom of a dip a few hundred metres before the barrier (at S42° 08.8216 E147° 49.5031) and this gives an easy walk to the ruins of former settlement for the construction workers. The dam site can also be visited from this western side of the river.    A GPX file can be downloaded.

From the road the track is a wide being a 4wd type and is fairly level to a point where it drops to a weir on the Macquarie River.  At the high point though there is a marked walking track going to the ruins of the probation station. Quite a number of the remains of buildings are there and it is interesting to wander about the site. Part way along a side goes east to overlook the dam site and the embankments built on both sides by the workforce.  Another very short side track goes to a grave.

The river can have crossed at the weir or at the embankment, although that is steep, and a sandstone quarry visited and coffer dam and Long Marsh itself.
Map     Colonels 1:25
Last Updated  &#1 Saturday, 2 April 2016 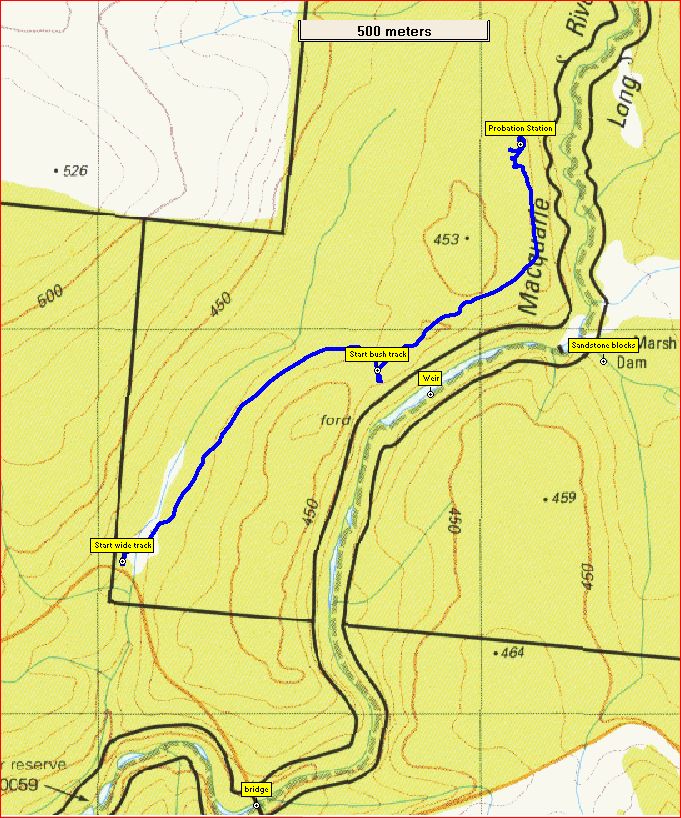 We tried to get to the dam site from Ross via Honeysuckle Road. in November 2017. Someone has [illegally ?] placed some large rocks on a cutting in the road near the dam site which made the road impassable. There was no signage and we were not sure how close we were to the dam, so disappointingly we had to turn back. Checked with a farmer on return - he said that the obstruction should be cleared by council as the roads are essential fire fighting access.
07 March, 2018 12:02

Peter Franklin said…
There were some large boulders blocking the road which I assume were put there to stop vehicles. Just beyond there used to be a bridge but has been washed away, so that was close to as far as you could drive. The track to the dam is just before reaching these boulders.
07 March, 2018 18:53