By far the Platform Peak was the best part of the walk. Once the forestry tracks and roads are left behind for the climb the vegetation becomes more interesting and the Boronia over the massif would be really good when in flower. Once the 900 metre height is reached delightful Snowgum woodland surrounds you. At the top of the climb a rocky prominence gives good views and the large summit cairn can be seen on the summit 600 metres away at the northern end of the plateau.
During the walk there are a couple of short wet areas to get across and a section where some overgrowing scrub where the track skirts the southern side of Big Marsh.
Lots of tapes mark the route and on the climb, traverse and descent of the main massif there were also triangle markers, although those nailed on live trees have been hammered in far too tightly and most of these are in stages of either being ejected by the growing tree; quite a bundle of these were picked up off the ground where they had fallen. 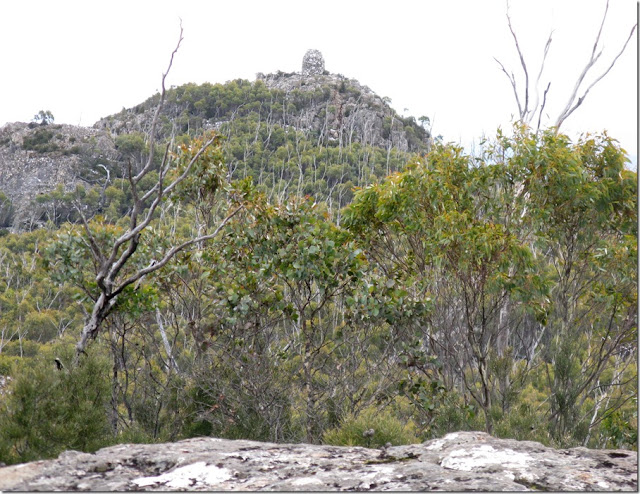 Beyond the barrier near the car park, it is initially a gentle ascent on a low grade road until a turnoff to a private block is reached where it deteriorates into an old logging road.  This goes up until a junction is met and the left one is taken; the right hand one continues on to Mount Dromedary. After some 650 metres another junction is reached and this takes you past the southern end of Big Marsh and through to a forestry road which is very close to the final walking track to the plateau leading to the peak. It is through this low lying section that the scrub closes in, but parts of it have been cleared somewhat although it won’t be long before a bit of pushing through will be required.
Once through this section (about 1.6k) and on to the forestry road, turn left (south) for just 70 metres where a bush track commences and gently ascends to the main plateau of the massif.  This is the steepest climb on the trip, although the descent off the other end is considerably sharper. Rock slabs are met at the top and then a dip through the gums again before reaching the very noticeable summit cairn.  Just before getting there a rocky ridge is met and this is where the track down goes.  The top is a mere 50 metres on.

On the return the track initially drops 100 in 200 length then becomes gentler the further you go. A good quality gravel road is met and followed up for 350 metres to a junction. The right (south) one leads to the spot where the earlier climb started, whilst the left circles around Big Marsh and on to a junction with a lesser track.  Take this and in a short time the inward route is met and then just retraced downhill to the carpark. 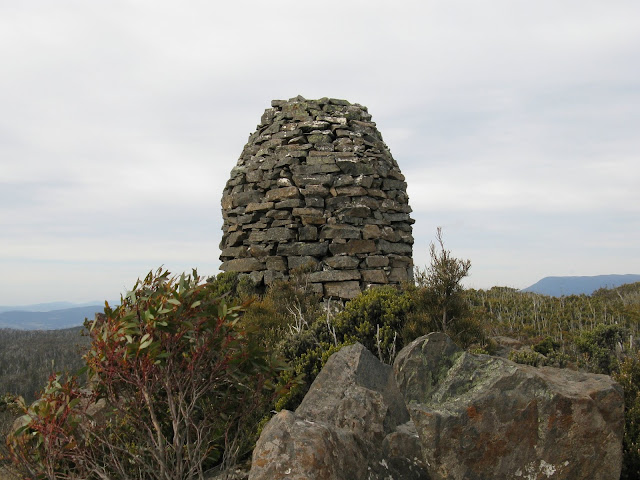 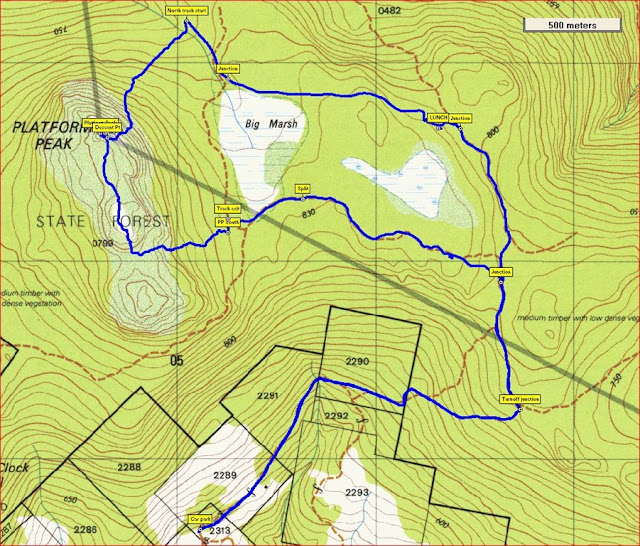