A little visited part of Mount Field, is Mount Crooke. Most of the walk is off track and ability to navigate is vital.  It is rough underfoot once off the tracks and depending on the route taken the walk varies from 6-7 hours.
The description below is just from the Davis River to Mount Crooke. The more westerly route did not have as much scrub and mostly it could be circumvented by weaving about. There was some scoparia closer to the Davis.
On either route there is often rock slabs that can be sued if you keep an eye out for them.  The northerly route encountered more scoparia and denser and taller bushes.
The eastern route took 53 minutes the 1.5k  whilst the return on the westerly one took 56 minutes for 1.7k
Mt Crooke is named after William Crooke, who was instrumental and a driving force to have Mt Field declared a nation park.  He was often referred to as the father of Tasmanian conservation and   in 1906 promoted the concept of land reservation for the Mount Wellington and Queen's Domain parks, Hobart, and of wildlife reserves including bird sanctuaries. Crooke was a keen fisherman and was a regular visitor to Lake Nicholls.
Map      Dobson
Last Updated  Saturday, 6 January 2018
Route Grade      medium to rough
Route Distance Klms       10
Related Links
Google Bushwalks Blog 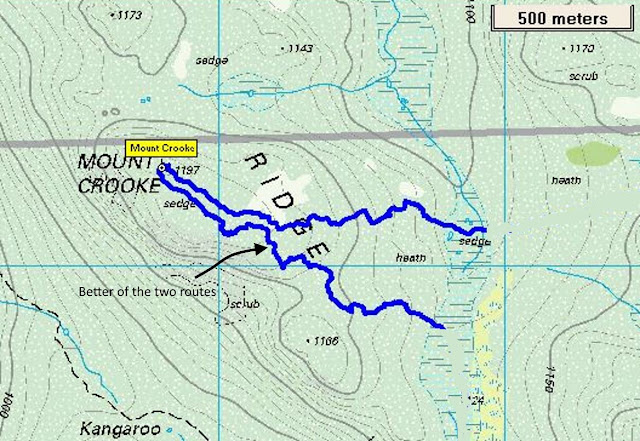