Initially the walk is on a rough 4wd track that appeared to have been cleaned up and it also had a few ditches dug to try to stop vehicle access, but bikes obviously were managing to bypass them. This continued for about 2k until a private property sign and fence were met and at this point we headed uphill.  During the 200m ascent we went through some really nice country with big rock slabs, lookouts and numerous grasstrees.  In fact grasstrees are a stunning feature of this section of the Meehan Range. Once on top there are several open areas and sections of easy scrub free through the trees. As the small ascent to basin hills is reached the eucalypt tree species is now smaller and quite different to those prior. Basin Hills is open walking and soon a 4wd track is met that continues along for the remainder of the way to Downhams Road.  At one point before exiting the PWS reserve land a track turned downhill and this may well go back down to a marked entry point off Magnolia Rd and would make quite a good circuit.

A private property sign was noted after we left the reserve, but it is only a short distance to the next bit of reserve and then the steep downhill to the road. It was amazing to see where vehicles have gone up and down and they must be desperate to get to the trees for woodhooking  to bother. Closer to the road there is heaps of rubbish unfortunately.  There is an alternative way down but this was not noticed and the exit point was to the road was some 500 metres south of the high part of the road and as a consequence a steeper ascent up the hill opposite. 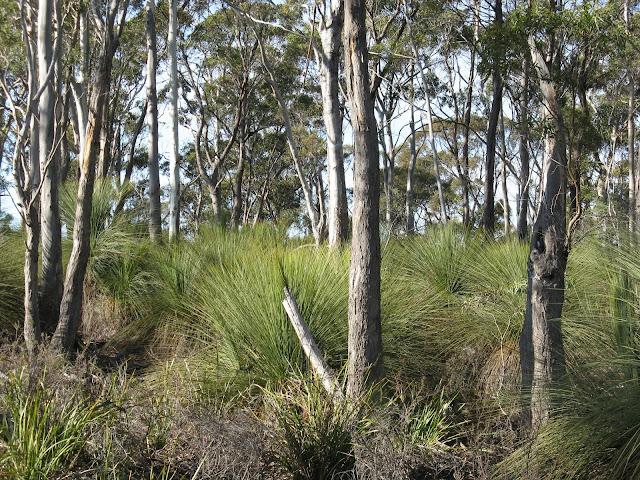 This hill had suffered from a fire, but seedlings were plentiful (2015) and are believed to be Eucalytus risdonii.  The property through here is owned by the Flagstaff quarry lot up until a solid fence is met, which if hopped over makes easier walking but then on the upper part of Eagle Hill it has to be got over again.  A couple more hills have to be ascended then descended before reaching Caves Hill and Rocky Tom.  To get there it is mostly open country and at one point we reached a rough 4wd which seemed to go too low, but it may possibly come back up and lead to Caves.

There are rock climbing venues of Shadow Buttress and Excalibur at Caves Hill also known as Rocky Tom and then it is down to Seagers Saddle and the open grassy hilltop. A gentle downhill bush section comes back to Downhams road and then you are soon in the streets of Risdon Vale and the start point. 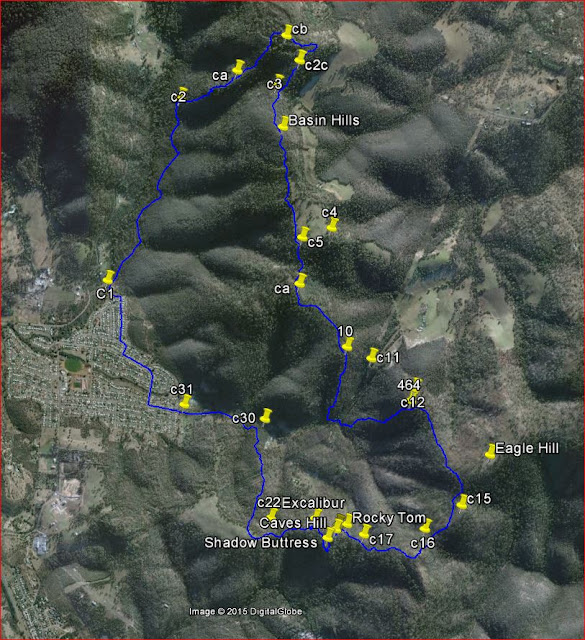